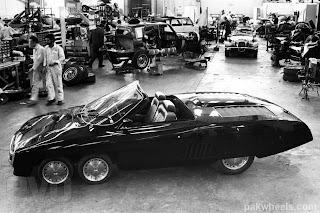 Inspired by the 6 wheel Tyrrell P34 Formula 1 car, Panther produced what was clamed to be the first production car that would do over 200mph. The power came from a 8.2ltr twin turbo V8 producing 600bhp. This car was not all power though, it came with electric everything including the dash, a TV and even a phone, this was back in 1977!!!!! It also had on board inbuilt fire extinguishers and carried 2 spare wheels well the front 4 wheels were a different size to the rears. Only 2 cars were produced , one in black and one in white before production was ceased. This car still has descendants today that I will be picking up in coming articles. 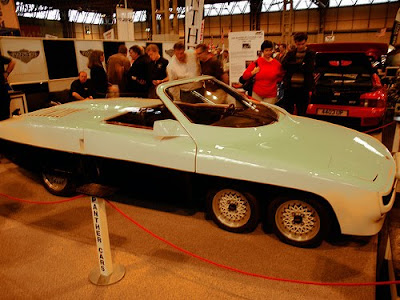 http://www.mypanther.de/videos/Web_Video_Panther6/web_Panther6.html
Posted by the petrol stop at 8:47 PM