There have been many developments in F1 that were banned with in a few races as an unfair advantage and no doubt I’ll post some up on here in the coming months. But on 1993 Formula 1 team Williams, who were at the top of the F1 tree, had a development banned before it even ended up on the race car!!!

The Williams FW15C CVT didn’t look any different than the current race car but its sounded like no other F1 car, not the engine note it was more that fact it didn’t change gear it was always on song. The reason for this was the CVT (Constant Variable Transmission) this went beyond an automatic gear box. The principal was 2 cones connected by a belt that could slip therefore having a constantly variable gear controlled by computer. This meant all the driver needed to do was put his foot down and brake and the engine and CVT would take care of everything else in order to run at maximum efficiency. I’ve included a clip of the car being tested by a young test driver namely David Coultard so you can hear it for yourself. 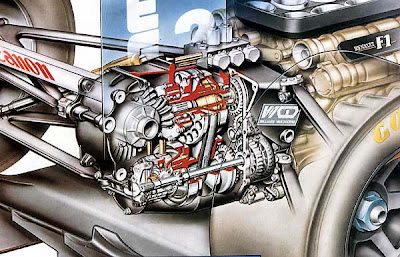 For more information on CVT-