Back in a more innocent time when the world wasn’t available on Google Earth to be explored in your lunch hour, explorers really went into the unknown and the public waited with baited breath for snippets of their adventures.
In order to tackle the unknown terrains where everything could be thrown at you preparation was paramount. In some cases this meant building a vehicle that was capable of taking on everything the Antarctic could muster. After all back in 1939, with no helicopters or communication other than radio, if you got in to trouble you were on your own.

Email ThisBlogThis!Share to TwitterShare to FacebookShare to Pinterest
Labels: 4x4 I had high hopes for this inaugural indoor event, ran by the same people behind the huge Classic Car Shows at Tatton Park, and the variety of both cars and marques didn’t disappoint. I had originally planned to get there early in the morning in order to have a proper look and get photos but unfortunately only got there at lunch time on the second day. To my surprise despite the local advertising it was very quiet, which was great because you really got to look round the 3 halls of cars. This may have been something to do with the sunny weather outside, the England game on the Saturday or the 1st Grand Prix being played out again on BBC1, but there wasn’t the turn out I was expecting, which was a real shame as there was some fantastic cars and a few rare ones that will be being featured on here soon. The only marque that was really missing was Volkswagon, but this would have had something to do with a major start of show season show in North Wales.

Read more »
Posted by the petrol stop at 1:05 PM No comments:

Considering it shares the same name as a similarly aged car the Mantis it thankfully doesn’t share its challenging looks. In fact you would think they were built by different companies. This single XP however was built to race at Le Man’s. Powered by a 3ltr V8 Brabhams F1 engine housed in a wooden chassis draped with fibreglass and Perspex this truly is a think to behold.

I love it when you're out and about and come across a car club meet, this one however was more then just a one mark meet, after following a precesion of Subaru's to Krispy Kreme's in Trafford Park I wa met by a huge meet. Running over 200 cars at first I thought it was  Jap meet but after a walk around nearly all makes were in attendance, with the majority being Jap. After some looking on the internet turns out it was the 1st Automotive meet set up by JDM Northwest and through Facebook with an open invitation. The variety of styling cues and cars made this a fantastic event to walk round, jut a shame I was in the family wagon.

Read more »
Posted by the petrol stop at 8:37 AM No comments:

The VW Beetle chassis and running gear is a versatile piece of kit being transformed in to a variety of different looks with the use of a different body (Nova), but this has to be one of the coolest. Curtis Brubaker picked up on the idea when he was running his small design studio, that there were a lot of the surfer kids running around in VW Vans, the idea of an alternative vehicle concept stemmed from that. He decided to build a concept for a kit car based on the Beetle, the reception he got when he showed it at the Los Angeles International Motorsports Show in the early 1970’s. The single door, boxed concept went down a storm and plans for production began.

While doing my usual trawl of the internet looking for interesting cars I came across these pictures of a train car transporter, not your conventional drive on/drive off type- 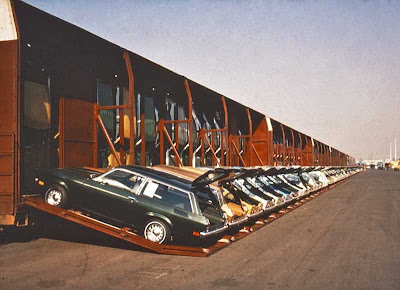 Read more »
Posted by the petrol stop at 1:10 PM No comments:

This F1 car holds a very important record, it was the only 4WD car to win an F1 race at Oulton Park in 1961 at the hands of Sir Sterling Moss. Granted it wasn’t a championship race but it was an F1 race none the less. Now 4WD is banned it will never happen again.

Ferguson had been supplying 4WD systems for cars (Jenson Interceptor FF) and heavy vehicles since the early 1950’s and believed it was now refined enough for a race car. Out of the box it was a handful not scoring to well then Moss took it out testing and changed his driving style to suit the 4WD system, obviously it worked!!

Read more »
Posted by the petrol stop at 1:05 PM No comments: 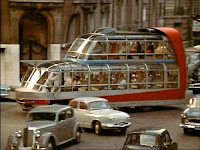 Back in the late 1950’s with optimism for the future following the war and normal life and tourism taking hold in Europe, particularly France Cityrama a tour operator commissioned Currus to build some bespoke coaches. Looking into a fantastic future these were sculpted out of glass with a nod to the Flash Gordon comic books of the time over a truck chassis, just look at that detail sticking out from the roof. With a retractable glass roof to allow cooler air in and two floors it was and is like nothing else and allowed the passenger to see everything clearly. Perfect for a sight seeing tour of Paris.

Read more »
Posted by the petrol stop at 1:11 PM No comments:

Glenfrome started as a car builder (although the original car never saw full production) then moved on to modifying Range Rovers from simple limousine versions to more bespoke versions for Arab Royalty. From 1983-85 they produced a rebodied Range Rover called the Facet. If at the end of the 1980’s you were in the market for a futuristic 4x4 that looked like it was straight out of a sci-fi film then this was for you. From what I can find out it was originally to be the ultimate off roader but it soon got laden with luxury, numbers or sketchy too running up over 50 produced in both the Facet hard top and Profile soft top variants. As you’d expect most were exported to the Middle East.

Read more »
Posted by the petrol stop at 1:24 PM No comments:

In the late 1960’s Karmann was well aware that the much loved Beetle was coming to an end and with it the subsidury versions that Karmann produced such as the Ghia and Cabriolet. With this in mind and the reintroduction of the Audi brand and new cars set to wear the badge, it got Giorgio Giugiaro to undertake a design concept for a 4 seater sports coupe, to replace the foreseen outgoing VW based models. The result was this in 1973, the Audi Karmann Asso di Picche (Ace of Spades in French). Based on the current Audi 80’s chassis and engine it was a radical departure in the styling department taking the wedge shape design philosophy of the 70’s and running with it. Unfortunately it could be said that the MK1 Scirocco beat them to it as at the time VW had signed off its design. But fortunately it was Karmann that was given the car to build.

Read more »
Posted by the petrol stop at 1:00 PM No comments: