A supercar from behind the old iron curtain in the early 1990’s, just one of the many companies entering the supercar market. Unfortunately with only 220bhp and a top speed of 153mph from its bespoke mid-mounted air-cooled V8, its was a little underpowered in the world of the 200mph hypercars that were already on the way. By 1993, 2 years after its introduction a reported 4 cars had been built before the plug was pulled. it’s a shame because it had the looks, I suppose you say it was all fur coat and no knickers.
Read more »
Posted by the petrol stop at 8:40 PM No comments:

Email ThisBlogThis!Share to TwitterShare to FacebookShare to Pinterest
Labels: Tatra 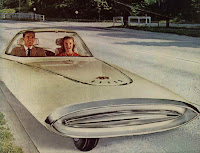 In 1961 Ford released this show/concept car, in the home of the car Detroit, as a possible look at the future. It was never meant for production but more for publicity. Looking like a large motorcycle with 2 side by side seats like a car, it used gyroscopes to keep the car upright. When stationary additional small wheels popped out of the side to stabilise the car. The Achilles heel of this car though was those gyroscopes, they would take 3 minutes to spin up to speed before you could drive away.
Read more »
Posted by the petrol stop at 8:54 PM No comments:

This is another example of how versatile the VW Beetle chassis and running gear truly was. This time just like the Nova, being a 2 seater coupe, but unlike the Nova its fitted with gullwing doors. Which in 1971 Would have been a novelty. As with most Beetle based cars, it was sold as a kit coming in various levels of completeness. In all over its 6 year life over 6000 kits were sold. Although some cars and parts do date back to 1969. Even Liberance owned one, in gold of cause. As you can probably guess no 2 are the same being customised as the cars were built, just google it to see the variety.

Read more »
Posted by the petrol stop at 8:58 PM No comments:

First introduced as a working concept featuring a turbo Rover unit mid-mounted behind the 2+2 cockpit in 1976, this elongated GT car never really changed in the looks departed up till its official launch in 1983. The only significant change was the interior that was described as sparse in the concept, this was reworked to be more luxurious with the addition of Scottish sourced leather. The interior design was always to be bespoke to each customer. The production cars were expensive by the standards costing between £25-30,000, by comparison a Lotus Esprit was only just shy of £19,000!!!!

Read more »
Posted by the petrol stop at 1:11 PM No comments:

Email ThisBlogThis!Share to TwitterShare to FacebookShare to Pinterest
Labels: Argyll 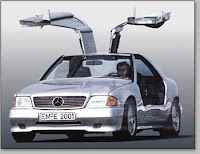 So what do you do when as a yuppie in the late 1980’s you wanted to stand out in the company car park while demonstrating how much money you earned? Buy a Mercedes 300CE I hear you say. No I said show how much money you earn, surely a bespoke tuned Mercedes 300CE, and Boschet could sell you one of the most memorable. Harking back to the original 300SL with its gullwing doors, Boschet would taka a standard 300 move the c-pillar forward 25cm, then graft these doors too it and sell it to you as the Boschet B300. The car was actually sold in both normal and gullwing variants, most sold being the conventional tuned doored version. But a small number of the good ones were built from 1989.
Read more »
Posted by the petrol stop at 8:40 PM No comments: