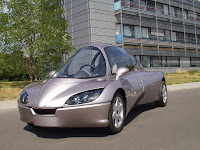 The premise behind the Jetcar Company is to build a fuel efficient car; the company first did this in 2001, with its archetypal concept. This though has been developed into the production version below in 2004, the 2.5 looks more like the Messerschmitt KR200 from the late 1950’s, even the concept behind it and the seating position are similar. Utilising an 800cc, 3 cylinder diesel engine with 41 bhp, it returns an amazing 111.9 mpg with a CO2 emission of just 66g/km, so all good there then and seems to do exactly what it set out to.

Email ThisBlogThis!Share to TwitterShare to FacebookShare to Pinterest
Labels: jetcar

The Citroen DS is by far one of the most perfect cars to be built with its quintessential French lines and flowing body work, its a wonder to see. So when a company like Chapron decides to convert it to a convertible they better get it right. The first attempt debuted in 1958 was a good start, however it kept the original front doors and simply welded up the rear ad puta chrome strip where the join would have been to the rear wing, which was now new.

Read more »
Posted by the petrol stop at 8:32 AM No comments:

After my father-in-law complained that there wasn’t enough trucks on the website I thought it was about time to rectify that. This is what I found, the Labatt’s streamliner truck, I think you’ll agree it fits The Petrol Stop perfectly.

In the mid 1930’s Labatt’s decided to start transporting its beer by road rather than rail, seeing this as a possible way also to grab the attention of the public it, also at this time advertising alcohol was still banned so they would act as an advertising tool as well. They commissioned Count Alexis de Sakhnoffsky, of coachbuilders Van den Plas in 1935 to build a fleet of streamliner trucks. The tractor units were White overcabs that were heavily reworked however the trailers were practically scratch built. Due to the shape it’s made out of a wooden body tub, with rolled aluminium covering it. They were the first truly aerodynamic trucks and won “Best Design” award at the 1939 New York World’s Fair!!!!! They even had modern technology built into them with an innovative anti-jack-knifing device in the fifth wheel and were the first to use air brakes.

When I first saw a picture of this car it was the profile and I thought “what an oddly elongated thing”, when I saw the front elevation I though “that can’t be the same car!!!!”

This was a concept/prototype built in 1992 around a tubular chassis with Ford Taurus running gear. Designed to be a GT car for cross continent cruising, particularly in the US where it was built, it had space for 3 and despite its mid mounted engine, still had a full size boot hung out of the back. Wait space for 3, I hear you ask, yes a central driver flanked by to passengers just like the McLaren F1, but probably with less elbow room. Access was via individual gullwing doors over those very wide looking sills. It never made production although as concepts go this seems well advanced from the pictures.

As you will see from the right corner, we are now on Twitter for updates as well, either follow the button or use the tag below-

Come on get following us.

Posted by the petrol stop at 1:09 PM No comments:

Looking like something out of 30’s comic or Flash Gordon, this is ones man’s vision of a futuristic mobile home from the 30’s/40’s, the ultimate land yacht. From concept to realisation the skill involved cannot be under estimated. Taking a humble 1973 GMC Motorhome due to its front wheel drove layout then combining it with a modified cab from a 1955 White COE and fabricating the whole structure and body by hand is no mean feat. 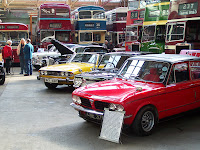 I was hoping this was going to be as good and as large as the Morris Minor Rally back in February, I'd heard that there was a national rally running around the UK involving and I was hoping that this was a stop along the way, however I was disappointed. I arrived at half ten to find only four cars inside and the shutter door up. I went for a walk round the Museum (I highly recommend this) and when I got back to the first garage a handful more cars had arrived and the roller shutter door was now down. There were only 7 or so cars, granted they were all differant marks and makes which was nice it was just a shame there was more. I got some pictures just not many.

This was the final development of a roadable helicopter developed Alfred Vogt of the Helicopter Technik Wagner company in the early 1960’s and was the final result of 4 pervious prototypes.. Using twin counter rotating rotors linked to a 260hp Franklin 6AS-335-B engine meant no tail rotator was needed. Instead 2 extending fins finished off the 4 seater cabin. On the road conventional controls were used. It was first flown on 1965, however following the Helikopter Technik Munchen (HTM) obtaining the design 1971, the project never got progressed and they eventually abandoned the Aerocar project. 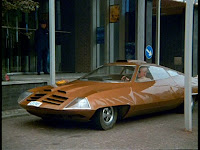 This car didn't just appear in one Gerry Anderson projects but two, initially the 1969 film "Dopplegander" then the TV series that made it well known as Commader Strakers Car in the 1970's, "UFO". The car was design by Len Bailey and built by the famous Alan Mann Racing Company, builders of the GT40 and Chitty Chitty Bang Bang!!!! It was not the only one built a sister car was also built with a slightly modified body. The car was sat on Ford Zephyr Mk 4 chassis with a hand made aluminium body fitted with gullwing doors. The cost for all this customisation??? £12,000.
Read more »
Posted by the petrol stop at 9:31 PM 5 comments: