There are two unusual things about this bus, one you’ll see in the pictures is rather odd articulated front wheels arrangement, the other was the body was made of plywood!!!! The timing though may have something to do with the latter. Built during the war it was designed to transport up to 117 factory workers, therefore to help the war effort. The use of plywood was simply as any metal would have been too valuable at the time. The advert below also states that it was built in house by Sante Fe Trailways own engineers.

I just think it’s such a strange arrangement, no doubt derived out of necessity using what was available in the garage at the time, although I do have another picture of a bus with the same configuration that I’m trying to get some more information on which looking at the styling postdates this bus by 10 years or so!!!!! 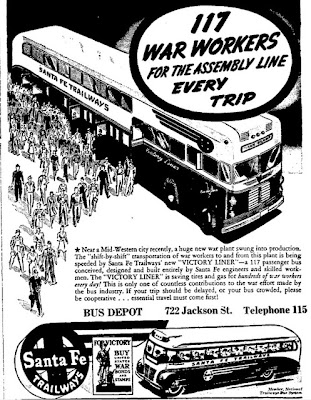 Email ThisBlogThis!Share to TwitterShare to FacebookShare to Pinterest
Labels: Coach